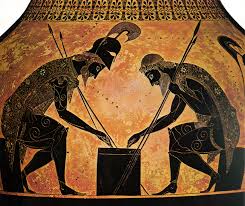 The Evolution of Consciousness, as i understand it…

Usually, I write on creativity, occasionally on self-development and sometimes on my own personal journey as a writer and independent publisher. But this post is on, yep, you read it right, The Evolution of Human Consciousness. The original philosophy was applied to artistic expression and this is how I came to be interested in it. You’ll have to bear with me because I can really only explain it as I understand it at this point. Things might get a little heavy, a little loopy and a little crazy for some people, but stick with me.

After chatting with a friend and fellow writer today, I was reminded that this is a topic that is very close to my heart and I need to write on it more because I feel we are running out of time and we need to, as a species, wake the fuck up or there will nothing left for our grandchildren.

Blunt, I know, but the time for equivocating has long passed.

Whatever you think of Darwin’s Origin of the Species and it’s correlation with your religion or lack thereof, you’ve heard of it. That is unless you’ve been living under a rock your whole life, or in some kind of cult… It’s interesting then that the idea that human consciousness is evolving along with our physical bodies is fairly new to most people. I think this is so because many of us who accept Darwinian physical evolution tend towards atheism or at least agnosticism and as a result reject the idea that “something”, like a soul or spirit, exists that is separate from and perhaps existed before and after the body dies.

Anyway, I am not going to debate with anyone about their personal religious belief because none of that matters; this isn’t about religion, it’s about consciousness.

Here’s a document I have posted before. I invite anyone to read it because it’s something I would love to discuss. I have included a video of the late Ken Wilber going into more detail about the stages and how they apply in real examples. I have posted this before and sent it to lots of people. I find this absolutely fascinating and crucial for as many of us as possible to understand and I’m shouting it from the rooftops.

This is my Synopsis as I wrote it on Facebook in a recent discussion.

I’ve edited it somewhat for ease of reading. The article I posted (above) is a synopsis of the work of Jean Gebser (from the early 1920s.) This is my current understanding of it. The work was originally applied to visual art and my notes on this are in italics.

In archaic times, humans believed that there was power in trees, in volcanoes, etc. The natural world was god, so to speak. This was the developmental phase of ME – totally ego-centric, the time of Survival mode – imagine a tiny baby, crying for a feed, this is that time. The 1-dimensional time of “I”. In art, these phases don’t exactly align with the accepted time periods. The art of this period is largely consigned to history, but the great pyramids of Giza remain.

This phase was followed by the magic/mythic ages. Humans began to create idols and symbols such as temples and imbue them with ‘power’. The mythic age being identified by the belief that the gods handed down certain things, like fire handed down by Vulcan or whatever. A time of personification of attributes and archetypes. This is the ethnocentric phase. (Right-wing political parties appeal to this part of us.) The two-dimensional time of “WE”. In art, we see totems, idols and sculpture. It’s possible that the great stone circles were part of this era. The very late period saw the destruction of the sacred natural areas to be replaced by the first ecclesiastical buildings.

The industrial/rational era ushered in with the Enlightenment or possibly even the Renaissance brought materialism; the belief that the material world exists and all that we cannot see does not. Science-based, money. The great cathedrals, temples and mosques rose in this era, but scientific discoveries also led to great leaps in the arts including the development of oil paints, the appearance of self-portraiture and a resurgence in fascination with classical sculpture and thought. Still ethnocentric to a large extent, but during this time slavery was virtually wiped off the face of the planet so there were many people who began to see us all as one race – the human race. While many are still in this phase of consciousness, this lasted really until the middle of the 20th century, saw post-modernism ushered in with the expansive growth following WW2.

The Postmodern era thinkers are world-centric, usually subscribing to moral relativism. The phrase “each to their own” springs to mind. In art, whatever you can ‘get away with’ according to Warhol. We see again the rise of the individual again, with rock-star artists like Damien Hirst producing multi-million dollar diamond-encrusted skulls. Postmodernism can be thanked for fame-seeking reality stars and companies that set up sweatshops in third world countries to make their luxury designer goods…

All of these phases still exist in various parts of the world and even within us at different points in our lives. We are obsessed with our survival as babies, and rightly so. I don’t know what Integral art looks like, but I hope it’s not just mandalas and fractals… All jokes aside, the hope is that we will continue to evolve, reaching the final phases in which we integrate all of the above and realise there is no I, no country, no race. We are all connected.

You know what? I am in a hurry. A reader (Thank you!!) made this comment recently and it hit home. I feel like I am in a hurry all the time and I need to slow down. I’ve been doing this Heart Math quick coherence meditation. Yes, it’s quick but does wonders for the hurried/harried mind!

This article feels rushed too. I could write 50,000 words on this and I just might, but I had to start somewhere, pouring the information in my brain out onto the page.