My mum had a phrase that she used a lot when I was growing up. She had a lot of them. Loves an idiom. Never metaphor she didn’t like…(okay I’ll stop.) And it wasn’t one of her famous minced oaths (google this term, it’s fantastic!) like “Well I’ll be jiggery-pokeried”. What? It’s possible that my mum is the only person on the planet who says this. It’s some kind of minced version of I’ll be damned. As in the “devil” is going to, you know, jiggery-pokery…eew.

Mum also used to say “one man’s meat is another man’s poison.” I know a lot of people say this. Apparently, it was an old saying when Lucretius talked about it a few thousand years ago, but my mum really loved this phrase. We were taught to that what one person loved might be truly revolting to another. It helped us to be accepting of the tastes of those around us, and/or be willing to try new things.

This did not, however, extend to opinions, beliefs or what we accepted as fact. We were expected to listen and learn and accept the information handed down by our elders; our parents, teachers and church leaders. This is a fairly sensible way to raise kids if the elders are trustworthy truth-seekers but a truly shitty plan if you are raising your kids surrounded by willful ignorance and bias as we all pretty much are. Who’d be raising kids now, sheesh, in these days of the Almighty Algorithm that feeds us what we want to hear like birds in a nest.

The sad part is, it is so easy to remain ignorant.

He was very confident about his opinion that ancient indigenous art had no value due to the ‘touching up’ by those tasked with maintaining the cave paintings. His opinion was based on years of training as a historian and artist. No, I’m joking. No training, no education, just his own brain pumping out theories based on who knows what. As someone who knows a bit about art and has been involved in a company that managed indigenous artwork sales, I tried to explain that as theirs is a living culture, maintaining the art is essential, just as the Italian government maintains the art in their museums and churches.

He also took the commonly known information that the dot-paintings made famous by indigenous painters since the 70s and were not, therefore, an ancient form of artistic expression, meant that they hold no value. I say that art is worth what someone is prepared to pay for it, but I prefer other styles such as the gorgeous Dorothy Marks piece below. 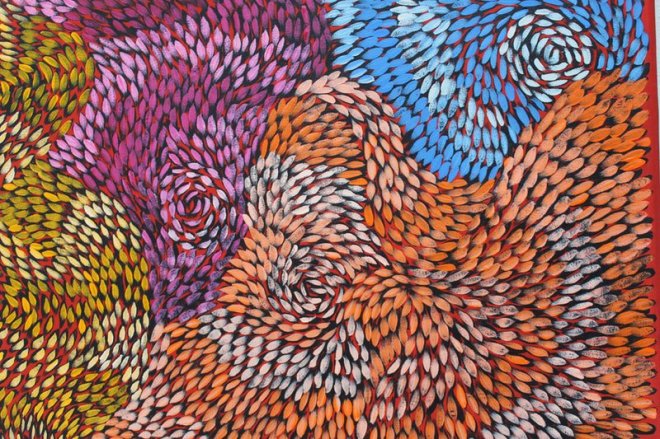 Look, this guy is a really nice guy, but he’s got an opinion and it’s his, but it doesn’t mean he’s right or his opinion has merit. I don’t believe that opinions hold equal weight. He is most welcome to decide for himself if he’d buy an artwork and put it on his wall, but I don’t think he gets to decide if it is art or not. Art is like that. Subjectively Meat? Or Poison? But it’s all art.

Then things took a bit of a turn for the worst. Emboldened by the feeling that he was right about everything, he then went on to state (not suggest, not imply, state) that the original custodians of Australia should be grateful for the English invasion and occupation (my words) because “they were just running around naked and spearing a fish then doing nothing all day.” mmm… My mate Andy chimed in with his own opinion that maybe they were onto something and it was us who had it all wrong. I can’t help but agree with him on that one! We tried to keep it nice and light but sometimes you just have to speak up.

How do we come up with beliefs and how do we change them? Education is the answer. We have to keep an open mind and be prepared to read widely, listen well and keep our mouths shut when necessary. I know this because I remember as a teenager enamoured with the Renaissance and the Enlightenment, I held that very same opinion, that ‘we‘ had come to this mostly empty and under-utilised expanse of land and made use of it.

As they say, when you know better you do better, and I know better now about this subject although I am sure I have other opinions just waiting to humiliate me in future!