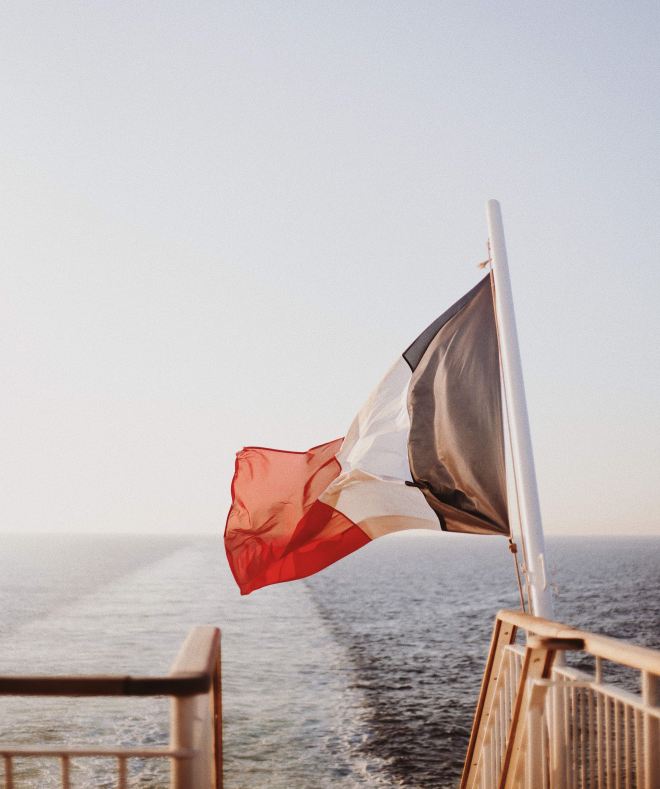 Thalia Henry and the Ghostwriter

This is chapter 3 of my current work in progress.

The sun was setting behind them as the ferry left Dover. Alia was relieved to find numerous pieces of her luggage stacked in the boot of the car, pulled an outfit together and was about to strip off in the vehicle hold.

‘Hey, no…you’re lying low, remember…trying to behave? There are tonnes of cameras here.’ He pointed to the roof of the enormous vehicle bay.

‘Sorry, I’m unfamiliar with this term…behave?’

Phillip smiled. ‘Well, you think before you act. That’s probably the first step.’

‘Right…sorry still don’t get it.’

‘Okay, before you do anything, ask yourself WWDJD.’

Alia’s eyes rolled and travelled from left to right as she tried to work out the acronym.

‘What would Dame Judy do,’ he said looking proud of himself.

Alia snorted with laughter. ‘You don’t know Dame Judy! She’d give me a run for my money, and she’d run rings around you. I tell you what, I’ll use WWDHMD.’

It was Phillip’s turn to try to work it out.

‘What would Dame Helen Mirren do?’ she said, as she peeled off her top. She stopped and looked at the shirt Star had bought for her. ‘This is nice…but the trousers are off to Oxfam in the morning…although they might need a wash….’

She looked up at Phillip. He had turned his back, but she could see his ears were bright pink. ‘Are you shy?’

Alia was surprised by his response. She tried to remember if she’d ever heard a man admit he was shy. She shrugged and pulled her favourite Tommy Hilfiger shift dress over her head and shimmied out of the black trousers. She screwed up her nose and rolled them in a ball and tossed them in the boot. ‘Okay let’s go and get a drink,’ Alia said slamming the boot shut.

‘What about the Club Lounge?’

Philip groaned when he turned around and looked at her

‘Can you wear something a little less conspicuous,’ he said

Alia looked down at her bright red dress. ‘To be honest I don’t own anything inconspicuous,’ she laughed

Philip shook his head. ‘No, we need to stay in the car. I just thought you would want to get changed.’

‘Star didn’t mention anything about staying in the car,’

‘No and she didn’t mention anything about swimming to France, either.’

They stood and stared at each other.

‘I could do this all day. I win every staring competition I get into…’

Suddenly, Alia squealed. Phillip spun on his heel and spread his arms wide.

‘Hey, you are a bodyguard! I’m not sure what this was going to achieve…’ she spread her arms to mimic his move. ‘I will get you to carry me like in the Bodyguard movie,’ she said.

‘What the hell were you squealing about?’

‘There’s a huge RV…’ Alia skipped towards an enormous RV parked to one side.

‘Hey Phil, I’ll pretend it’s mine, take a photo.’ Alia reached around her back as though there were pockets there and when she found none, patted herself down frantically as though she was on fire.

Phillip stood and watched her. ‘What? Never seen a woman completely and utterly confused about what’s happening to her life?’

Phillips phone rang in his pocket.

‘Hello?’ he said and then said nothing more for over four minutes. ‘Okay, thanks…yes, she’s here…where else would she be?’ He mouthed the word ‘Star’ at Alia. Alia held her hand out for the phone.

‘Hi Star…Fuck you,’ she said into the phone and jabbed the red ‘hang up’ button. She handed the phone back to Phillip and turned towards the stairs up to the decks.

She walked five feet before the phone rang again. Star would not be happy about her hanging up like that, but she hadn’t really given Alia much choice. Star would understand she would be dying for a drink right about now. She was dying for coffee. She desperately wanted to take a shower. She turned back to Phillip. He had answered the phone, but he wasn’t saying much; Star must be in one of her monologue moods.

Two young girls appeared next to Alia, broad grins on their faces, offering up their phones for a selfie.

‘Hi girls, do you have any money? How about I do a selfie with you if you go and get 20 pounds from your dad? Euros will do too…’

The grins began to disappear, but suddenly Phillip was at her side prattling about how funny Alia is, how she’s working on new material. Phillip pulled a white bundle from his jacket and handed it to the girls. They unrolled the little fabric packages to find a limited-edition t-shirt and two pins for them. ‘Head back to your folks, girls. Right now,’ he said.

‘We saw you on YouTube, Alia. It was hilarious when that short copper tried to cover you with the blanket and his eyes were the same height as your boobs,’ they called as they ran back up the stairs.

Alia stopped walking. She tried to stifle a grin, but it was brilliant to get even that little bit of feedback about the video.

‘We’d better get back to the car before they go and tell their friends,’ Phillip said.

‘What’s the big deal? Tomorrow one of the Kardashians will do something and no one will care about my boobs.’

‘Walk,’ he said. He wasn’t aggressive but he left Alia no room to refuse.

They climbed back into the car. She pushed the carton on to the floor. ‘Oops, I hope that wasn’t fragile…’ She saw Phillip flick a switch on the inside of her door before shutting it. When he was settled in the front seat, she suddenly leaned forward. He let out a yelp.

‘I’m sorry, did I scare you?’ she said. ‘I am scared right now, because I saw you put the child lock on my door. Do you understand how this feels for me right now? I am a lone woman, locked in a car. I’m vulnerable…’

Phillip turned to look at her. ‘I’m sorry, I really am, but I work for Whitehall and they asked me to take you to the house in Paris. I have my orders…’

He held up the phone for her, but she waved it away.

‘Wake me up when we get to France,’ she said and pulled the scarf over her head.