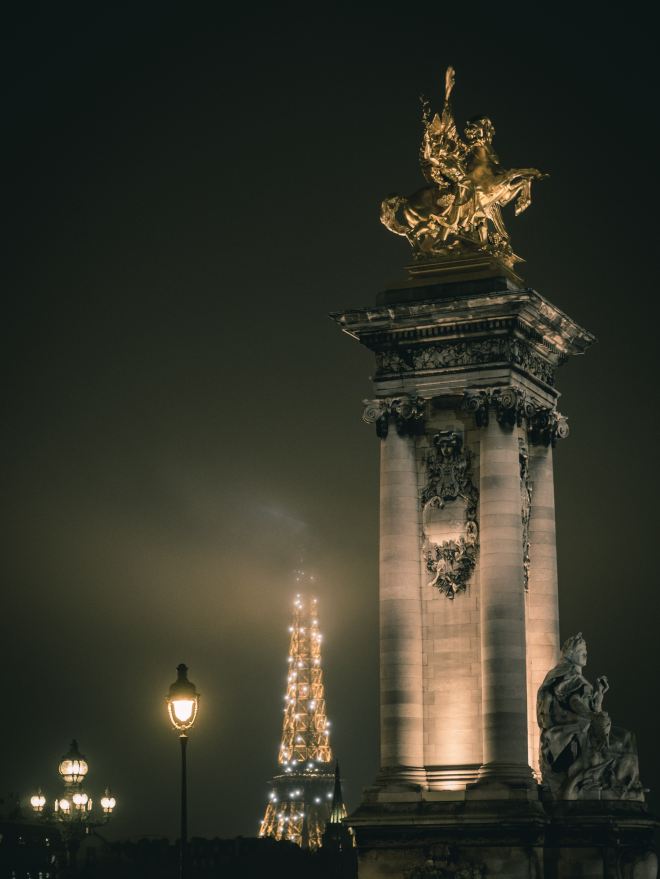 It had been firmly on the bucket list, this trip to Paris, but then doesn’t everybody? Want to visit Paris, that is. I’m sorry; my thoughts are jumbled. I’m here finally and how I got here isn’t important. What’s important is enjoying myself. I won’t worry about what happens…after. I’ll be in the present, finally, after years of thinking about the future I’m going to enjoy the moment, and at the moment, I’m in Paris.

I look right, then left and then right again but my feet don’t move. The road is so wide I can’t understand which way the cars are travelling. Is it a One-Way road like the Place d’étoile? Is it even safe to cross such a huge expanse of road? Is it legal? There are very few cars but it’s dark and I really want to be sure that it’s safe. I don’t want to get hit by a car, in Paris. That would be ironic, although I’m told the healthcare is excellent.

I can’t really remember crossing the vast cobblestone expanse but sure enough, after some flustered movement, I am standing beside the fountain in the centre of the Place de la Concorde. I know that this name means ‘the place of peace’, but I don’t remember who told me this little snippet of information. The name floats around in my mind along with some other delicious phrases in French. Imagine being one of those people who wakes up from a coma speaking another language fluently, I think. That would be cool, I think, and the word cool is elongated inside my head the way my French teacher says it. That’s the frustrating thing for me; I can do the accent. I can speak English with a wicked French accent but that doesn’t get me anywhere, in class or in France.

I see my brother and his wife across the road with their Doberman Pinscher. His name is Jonah; the dog, not my brother. My brother’s name is Grant, and for some reason I think his wife’s name is Mandy and all the thinking in the world won’t change my mind. I didn’t know my brother Grant and *Mandy were in Paris. When they met, *Mandy had a rescue cross-Shi Tsu called Fugly, for obvious reasons. Grant was embarrassed to be seen with *Mandy and her dog but they had that dog for years. Grant cried for hours when Fugly died. That ugly dog changed my brother the way Buddhism changes people, I think, and laugh at my own joke. I peer at them across the now empty road. It’s not them, it can’t be. It’s two French people walking their dog late at night who remind me of my brother and…his wife.

I shake my head. Grant wouldn’t be in Paris and he doesn’t have a Doberman Pinscher named Jonah.

I must look a sight. I’m standing in the middle of the Place de la Concorde shaking my head. I’m struggling to get my thoughts straight and the two French people who look like Grant and…what is her damn name? Michelle, I say out loud. Michelle. How silly of me, but then I am somewhat distracted by finally being here, in Paris, checking some stuff off my bucket list.

Someone is talking to me and I turn around. A policeman is telling me that I need to move. He’s kind and although he speaks to me like I am a child, I’m overjoyed that I can understand him. At first, I think he’s speaking English but suddenly I realise he is speaking French to me and after all these years, and hundreds of lessons, I can finally understand what someone is saying to me. I follow him across the road towards a beautiful building that appears to be a hotel.

He smiles and asks me if I am okay, but he says it in that way we reserve for people whom we suspect are not, in fact, okay at all. I wonder briefly if this is a dream, but I can feel the night air on my skin, and I can see the five o’clock shadow on his chin. He is very handsome.

“As long as you’re okay?” he says in English and I am disappointed. He has reverted to English.

I follow the rest of the people, people I hadn’t noticed previously, into the hotel. It’s luxurious and dimly lit; it is late after all. The deep crimson carpet, there must be an acre of it or more, spreads out in every direction. The concierge speaks to me in French but then changes to Spanish. I wonder if I look Spanish but by the time I locate a mirror and decide that no, I don’t look Spanish at all, he has switched to English. He asks if I am okay and I’m disappointed again. Why won’t they mistake me for a French woman?

“I’m in Paris so of course I’m fine,” I say, and walk towards the elevators.

I am staying here, on the fourth floor, I suddenly remember. They brought me to the first floor, but once I was stable, they moved me to the fourth floor. I stop before I press the tiny golden call button on the elevator. Stable, I think. I turn the word over in my mouth like a Jaffa. The word doesn’t fit with this sumptuous hotel, it doesn’t fit with Paris and I don’t like it. I start to cry, and the concierge is next to me, gently rubbing my hand. He is speaking to me, but I can’t really understand him which is strange because I know he is speaking English.

“I just need some sleep,” I say to him. “Do you have anything to help me sleep?”

The French can always be relied upon for their excellent over the counter painkillers, I think, and it makes me laugh because it is a phrase I’d heard a stand-up comic say once. It had been part of his routine; he was very critical of the French in every way except their health system. People hate Socialists until they need a cheap doctor, he said.

Sure enough, I wake to a cool morning in that King Size Bed. I know it’s a perfect day, even without the benefit of seeing the world beyond this room. I am in Paris; what can be wrong with the world? The sun is shining; I can see tiny fingers of bright light reaching over the dark curtains, but my room faces…I think about this for a moment…north, so the room is cool, and the view is of the rooftops of Paris. If I was in the South Facing rooms, I would be able to see the Place de la Concorde and the needle, perhaps even The Louvre.

There is a breakfast tray and it looks as though I’ve already eaten even though I don’t recall doing so. I wonder for a moment if there is someone else in the room. I am standing beside the tray looking down. I reach down and feel the coffee cup; still hot, so it can’t be yesterday’s tray. I look about the elegant room. I can’t imagine for one minute that a hotel like this would allow yesterday’s breakfast tray to lie unnoticed in a guest’s room. I pick up the cup and cradle it in both hands. I take a swallow of coffee. It’s hot, proper hot. I look down at the tray. I lick the tip of my pointer finger and push it down onto a croissant crumb, inspect the golden flake and put it in my mouth. Perhaps I just can’t remember eating. This seems reasonable for a moment, but I do find it troubling.

My phone rings somewhere in the room. I’ve changed my ring tone; it now calls my name instead of playing a tune. It’s fun.

I want to answer it, but I don’t know where to begin looking. Yawning, I pick up the coffee cup and take it over to the window. I pull back the curtain and stand there, looking out over Paris, drinking my still piping-hot coffee. I feel like an adult for the first time. I’m twenty-six, nearly twenty-seven, but this is the first time I have felt like an adult. I’m standing in an elegant hotel room in Paris, draped in a bathrobe, cradling my hot coffee while I admire the view.

I lift the cup to eye height. I appear to be bone-china, but it has the most remarkable heat-retention capabilities. The translucent black liquid is still hot. I love hot coffee; it’s probably my favourite thing in the world.

Then I am in the shower looking at the bathrobe bundled up on the floor. I am thinking about all the things I could do that day if I wasn’t so tired. How can I be in the moment and still so tired?  Where is my flow state? As I dry myself on the fluffiest white towel I’ve ever used, I think about visiting Notre Dame. That’s impossible now…after the fire. I settle on a plan; I’ll climb the Eiffel Tower after I have a little more sleep.

“Charlotte,” the phone says again from a distance and it says it in my brother’s voice.

“Charlotte,” it says again, and then there is some music. Where is the music coming from? Summertime…that’s my favourite song. I close my eyes. I will climb the tower in a few hours I think, but the phone is calling my name.

“I’d really just like to sleep,” I tell the room.

I want to sit up, but I’m so very tired and now I’m scared. There is most certainly someone else in the room with me. I feel as though I’ve been drugged. The coffee. The coffee has been laced with something, I’m sure, by whomever has eaten my croissant. I know I didn’t eat it, but those crumbs…

“Charlotte, can you hear me?”

“We’re going to the third floor…’

I don’t want to go to the third floor. I want to go walking on this beautiful day, in Paris, to see the sights…

“Charlotte, the doctors need to relieve the pressure on your brain…Charlotte, can you hear me?”

The phone is talking too much and too loudly in the bright room and now the policeman, the concierge, my brother and what’s her name begin to wheel my bed out of that luxurious room on the fourth floor. I was happy, in Paris, I try to tell them, but they look so concerned so I decide to tell them after I wake up.